Fresh off the press 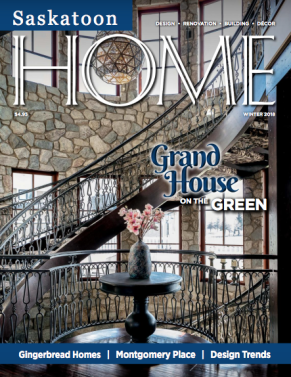 With the exception of an article I wrote two years ago about the green roof on our garage, no other article I’ve written has received as much feedback as a recent piece I wrote for Saskatoon HOME magazine, entitled, Grand House on the Green. I had the pleasure of touring the home and interviewing the owners last month, and the article was recently published in the winter issue.

Since it came out, I’ve received several texts and phone calls about it from friends and family. People seem to be equally impressed with the mathematical ingenuity the staircase design would require and the number of extra-curricular activities available to the family: swimming in the pool in summer, skating on the sport court when it’s flooded in the winter, watching movies in the luxurious home theatre, soaking in the hot tub, working out in the gym, cooking in the outdoor kitchen, practicing their golf skills on the putting green, singing karaoke, I could go on, but you get the idea. You can read the article here. 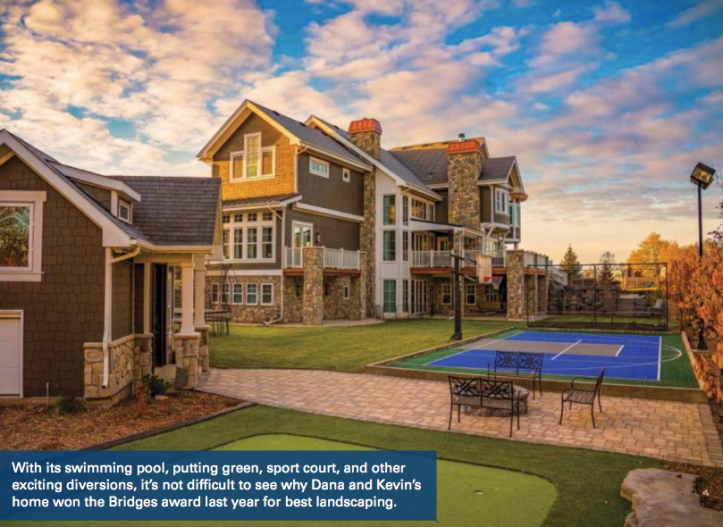 I also had the pleasure of interviewing my friend Cheryl for an article called, I was here, in the same issue of Saskatoon HOME. We chatted about how she and her family made their mark on her new home during the construction phase. Today’s new home builders are personalizing their spaces by rendering well wishes on the studs, fusing special items into their foundations or placing them inside the walls before the drywall is hung, and, in Cheryl’s case, imprinting the tiny feet of their children into concrete pavers in their landscaping. You can find the article here.

I also contributed a third piece about how we can create a winter culture in Saskatoon by embracing the chill instead of the Netflix and chill. It gave me the opportunity to interview a Berlin-based lighting designer who will soon be bringing her talents to our city with her lighting design for the Shakespeare on the Saskatchewan redevelopment slated for 2020. You can read all about Cool Ideas for Cold Climates here.

Another magazine I’ve contributed to this year is fresh off the press. Thrive is the alumni magazine for the University of Saskatchewan’s Edwards School of Business. I wrote two pieces for the issue, including one on alumna Mackenzie Firby, the owner of Two Fifty Two boutique (a high-end fashion store with locations in both Saskatoon and Regina). There’s nothing better than escaping the office and meeting talented, successful entrepreneurs. I love getting a day-in-the-life glimpse at what other people do for a living.

I’ve written about everything from fat biking adventures to the evolution of 3D printing this year, and my work has been published in two new places: CBC Saskatoon and Prairies North magazine. As 2018 draws to a close, I’m feeling grateful for all the opportunities I’ve had to interview fascinating people, tour incredible homes, and simply learn new things every day. Here’s hoping for more of the same in 2019.